Charlie Sheen’s car was taken again and driven off a cliff again. And now Brooke Mueller is going to rehab again.

Coincidence? I think not! Actually I have no idea; I’ve just always wanted to say that.

Law enforcement tells [TMZ] Charlie had a surveillance camera at his house, but the video only shows one person who appears to be “messing with the car.” Problem is … the video is “very shadowy” and it might be impossible to identify the thief.

As for surveillance video at the guard gate — we’re told it shows “nothing that was useful.”

Early this afternoon Charlie Sheen and Brooke Mueller’s supposed divorce documents were made public and let’s just say that if the couple does actually divorce, Brooke is going to make out quite nicely. And well, Charlie should just never get married again.

… In addition to getting a 50% cut on the baby photos the couple sold to Getty Images, Brooke gets several bank accounts and a lump sum parting gift of $757,689.70.

Charlie gets the house but has to buy Brooke out to the tune of around $1 million.

Charlie also gets to keep his $5.6 mil watch collection.

At the end of the document, Brooke agrees “not to disclose to any media sources personal information relating to Charlie’s sexual affairs or alleged drug usage.” For his part, Charlie agrees not to talk about Brooke’s alleged drug use.

Which brings me to the next thing.

Although she has in-home rehab, Brooke Mueller has apparently fallen off the wagon again; and once again, is checking herself into an inpatient rehab facility for 30 days.

First two of Charlie’s cars are stolen and driven off cliffs, and now Brooke is taking her crack-smoking self back to rehab.

I don’t know – maybe it’s just me – but I’m feeling like the two are connected. 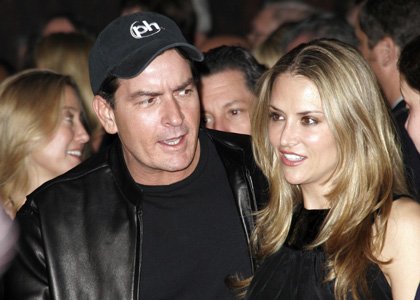