Wow. Just Wow. It really is true what they say about the apple not falling far from the tree and how we all become our parents.

Clearly Lindsay Lohan (the apple) has learned from her mother Dina Lohan (the tree) how to avoid taking responsibility for your actions, how to blame everyone around you for everything you’ve done to yourself, how to remain in denial your whole life, and how to tell bold-face lies.

What a great legacy to hand down. It’s so much better than the “be a good person” and “give back to society” crap I was fed as a kid.

In a recent interview with In Touch Weekly, Dina Lohan got out her little violin and answered their question as only a Lohan could do. Here are some of the more amusing responses:

How does Lindsay feel about going to jail?
When the decision came down, it was horrific. We hugged and cried a lot. But we’re optimists. Lindsay is sober and she’s fine. I don’t want to speak hypothetically [about jail] because she’s not going to be in that situation.

But the judge says she has to be in jail by July 20.
We’re taking it one day at a time. I don’t know what the outcome will be.

When people say, “What did you do for her, Dina?”, how do you respond?
She went to rehab before the court ordered her. When I put my daughter in rehab, I knew she needed it. In 2007 — not currently.

Kids lie to their parents. Do you think she’s ever been dishonest to you about drinking or drugs?
I’m going to keep it general. I give my kids enough room — I don’t smother them. I think you have to let them make their own failures to make success. We’re all going to fail at one point at something.

As a smoker, how will Lindsay deal with not being able to smoke in jail?
When the time comes, she probably will have to get hypnotized, but again, we’re hoping it doesn’t come to that.

What is she the most scared of about jail?
She is claustrophobic, so she’s in fear of that.

What are you most scared of?
If Lindsay went to jail, I would fear for her life. Jail doesn’t help anyone no matter what problem you have — unless you’re a rapist or a murderer. This wasn’t a violent crime, but they’re saying you miss a DUI class and have to go to jail for three months — that’s absurd.

Are you worried about Lindsay overdosing now?
Every mother worries about their children every day, all the time.

What are Lindsay’s goals for the future?
Lindsay actually wants to open up her own rehab center here [in LA] and a couple across the country to help other kids and celebs so they don’t fall through the cracks in this town. She mentioned it to me a couple of days ago. She’s really growing up.

Here’s a little bit of something interesting: Dina Lohan was not present in the court room when Lindsay Lohan was sentenced to jail last Tuesday. Dina, of course, is claiming that she was there, and still has not said what she was really up to that day. 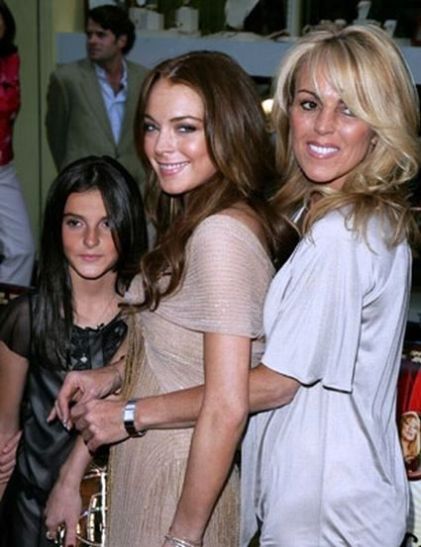