Leave it to crazy old lady Joan Rivers to say what we’re all thinking. Not that it should surprise us; she’s been doing it for years.

Joan River calls them like she sees them – basically calling Lindsay Lohan’s parents horrible parents. Then she offers to pay for rehab.

“If I were Lindsay’s parents, I wouldn’t be on television discussing it, I wouldn’t be [getting on] Joan Rivers for doing a stupid joke on her blog, I would be taking [Lindsay] to rehab and a rehab where you don’t get your nails done… I think it is so sad, the road that this girl is going down. It’s appallingly sad… She better get into rehab and better get into it fast… Lindsay, I am pleading with you… you’re beautiful, you’re smart, you’re talented. Go to rehab, you’re young! Melissa and I will pay for your rehab!”

But Joan doesn’t stop there; taking a shot at Samantha Ronson and other people around Lindsay who don’t seem to have, what Joan feels, is Lindsay’s best interest in mind.

Joan Rivers is totally right – somebody should be taking care of Lindsay Lohan. And if it has to be Joan Rivers, so be it. 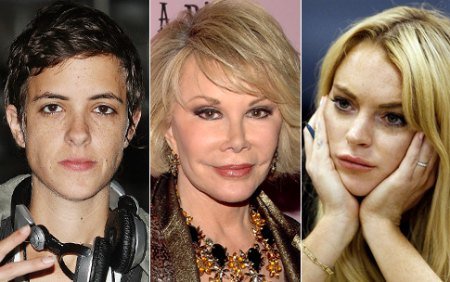