So the boyfriend and I just watched Jennifer Love Hewitt’s Lifetime movie The Client List – the true story of Samantha Horton, wife and mother of three turned massage parlor hooker.

It was ok for a made-for-TV movie – especially one with J. Love – but it certainly taught me something…..no matter how desperate I get for money, I could never sell my body. Just sayin’.

Anyway, what I really want to talk about is Lindsay Lohan. As I’m sure you are aware, LiLo is due to check herself into jail tomorrow. And boy is she freaking out!

“It’s been a rough weekend,” a source tells People. “She has not been able to sleep and has barely been eating. All weekend, Lindsay kept crying, chain smoking and chewing her nails.”

Apparently no one has been able to calm Lindsay down, including Samantha Ronson, her sister Ali, and even her mother Dina Lohan. “She is a nervous, fidgety mess, and her legal team, family and friends are very concerned about her fragile state,” the source adds.

All Lindsay can think about is that jail cell she’ll be sitting in right around this time tomorrow. “She’s been picturing herself in jail and she can’t handle the idea of it,” says another friend. “She doesn’t want to go. She doesn’t think it’s safe. She doesn’t know how she’ll make it.”

Personally, I think she needs to just suck it up and deal, but this is Lindsay Lohan we’re talking about and she’s a super-duper drama queen who seems to thrive on chaos.

Late last week it was reported that Lindsay Lohan had hired Robert Shapiro as her new lawyer, and checked herself into his rehab facility. One condition of Shapiro representing Lindsay was her agreement to abide by Judge Marsha Revel’s sentencing.

Oh, how things can change in just a few days.

Apparently Robert Shapiro visited Judge Revel this morning and informed her that he would no longer be representing Lindsay. And since Shawn Chapman Holley never signed the substitution of attorney form last week, she is once again Lindsay’s lawyer.

Does this mean Lindsay will refuse to turn herself in on Tuesday? It will certainly be interesting to watch, that’s for sure!

Tomorrow Lindsay is supposed to turn herself into authorities in Revel’s courtroom, or a another warrant will be issued for Lindsay’s arrest.

When Lindsay does go to jail she will be in solitary confinement, for her protection, about 20 hours per day, will be allowed to shower every other day, so those hair extensions, and profanity nails will be gone, she will be allowed to exercise three times a week, hopefully on a shower day, and the jail will decide if she can take any of her prescribed narcotics while she is incarcerated. 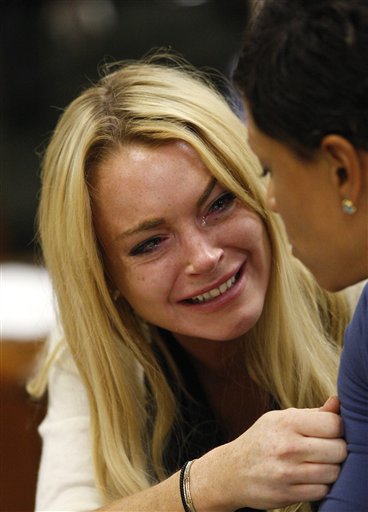