I bet she’s crying in her cell…all the do-da day!!

So today was the big day for Lindsay Lohan. After arriving about 10 minutes late to court (surprise, surprise), she was ordered into custody and taken away in handcuffs. We didn’t get to see that part, but here’s a link to TMZ’s video of the five minutes that led up to it.

Lindsay Lohan was clearly upset as the Judge talked. It was obvious to me, by the way she was breathing, that she was having a bit of an anxiety attack. I know these things – had my first anxiety attack when I was 3 and they have never stopped. Yay me! But this post is about poor LiLo, so I digress.

Lohan, 24, was accompanied to court by her mother, Dina, and younger sister Ali, who wiped away tears after her sister was taken into a lockup for the 90-day sentence, which is likely be shortened in part because of jail overcrowding.

Her father, Michael Lohan, yelled, “We love you Lindsay!” as his daughter was led away.

…While the judge did not address Lohan’s tardiness Tuesday directly, she did order her to report to probation officials within a day of her release from jail. The judge had previously ordered Lohan to report within two days.

Revel also has ordered officials not to allow Lohan to serve any of her sentence on house arrest or work release.

…Lohan, a prolific user of the microblogging site Twitter, posted a message roughly 12 hours before her court appearance referencing her looming incarceration.

“The only ‘bookings’ that I’m familiar with are Disney Films, never thought that I’d be ‘booking’ into jail eeeks,” Lohan posted.

…She is expected to serve her time — probably a quarter of her sentence or less — in isolation at a women’s jail in the industrial suburb of Lynwood. The facility has hosted several female celebrities, including Paris Hilton, Nicole Richie, Michelle Rodriguez, Khloe Kardashian and very briefly, Lohan.

She will be forced to wear a jail-issued jumpsuit and be given a set of simple toiletries that all inmates receive: toothbrush, toothpaste, soap, comb, deodorant, shampoo and shaving implements. Hilton received one for her own secluded 23-day stay in 2007 for reckless driving charges.

I sure hope Lindsay Lohan stays behind bars longer than the above mentioned female celebrities. Quite honestly, I think Lindsay is way worse for wear than any of them were when they were behind bars. Plus Lindsay has done nothing but bitch and whine and blame everyone for being out to get her, and I think that’s really unbecoming.

And I REALLY hope this jail stint, and the rehab that is to follow, will be a real-deal wake-up call for the actress and she’ll come out as good as new. I’ve always said Lindsay Lohan is a talented girl, she just got turned around somewhere along the line.

Here’s a picture of Lindsay Lohan being driven to jail this morning. Kinda funny that with all her freaking out she didn’t even shed a tear this morning – unlike some people. *cough* Paris *cough*.

Hmm, I wonder what Lindsay’s thinking….. 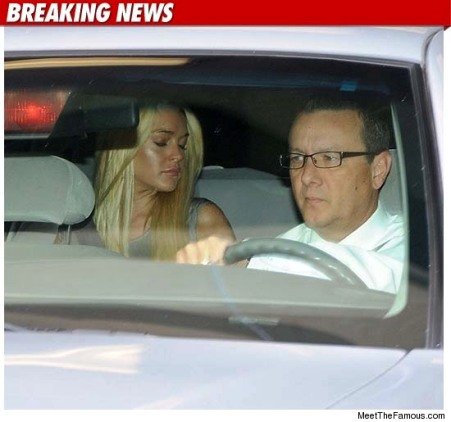