Comedian Dane Cook’s half-brother, Darryl McCauley, was sentenced to five to six years in prison on Wednesday for embezzling millions of dollars from Cook while working as his business manager.

McCauley pleaded guilty to 27 counts of larceny, three counts of forgery, embezzlement and other charges; after his release he’ll be on probation for 10 years. McCauley must also pay restitution to Cook.

Side Note: Dane Cook and Darryl McCauley are related by their mother, Donna Cook, who died in 2006.

McCauley served as Cook’s business manager from the early ‘90s until December ‘08. He began stealing from his brother beginning in 2004. At one point, McCauley even wrote out a check for $3 million to himself from one of Cook’s bank account.

Dane Cook has not publicly commented on McCauley’s sentence.

Back in 2009, Cook appeared on Larry King live and touched on the subject.

“It’s a terrible betrayal,” Cook tells Larry King. “But hopefully justice will be served and I can move on with my life.”

“I worked with my only half brother for several years,” Cook says. “Woke up one day and a lot of stuff was missing. There is a good chunk of money that is certainly not accounted for. That’s all I can say about it at this point.” 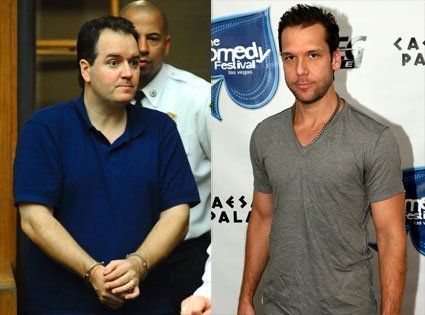