While enjoying some fun teenager time in Canada this past weekend, 16-year-old Justin Bieber found himself on the receiving end of a verbal attack – from a 12-year-old.

According to the most recent reports, Justin Bieber was playing laser tag when a boy came up to him and aggressively called him a homophobic slur.

Sources say that during the game of laser tag, the kid went out of his way to target Bieber repeatedly – which is against the laser tag code of honor, apparently. When the kid cornered the tween pop star and continued to shoot him, Bieber said, “That’s enough.”

In response, the kid said, “What are you gonna do about it, faggot?”

The kid then reached his hand out towards Bieber and said, “You’re a faggot.” Bieber reacted by pushing the kid’s hand away to the left.

Law enforcement tells TMZ it was the boy’s father who filed the complaint hours later … and our source says the father was heard at the scene repeatedly telling people, “I’m a lawyer.”

The police investigation is ongoing, but our sources say police already know the fault does not lie with Bieber.

As a result of this incident, TMZ also reports, Justin Bieber will most likely “lend his support to the anti-bullying campaign” this week; if nothing else, we can expect a public service announcement.

Below is a picture of inside the laser arcade. The white arrow points at Justin Bieber, his father is to the right. The 12-year-old boy is in front of Bieber, wearing a black sweatshirt. 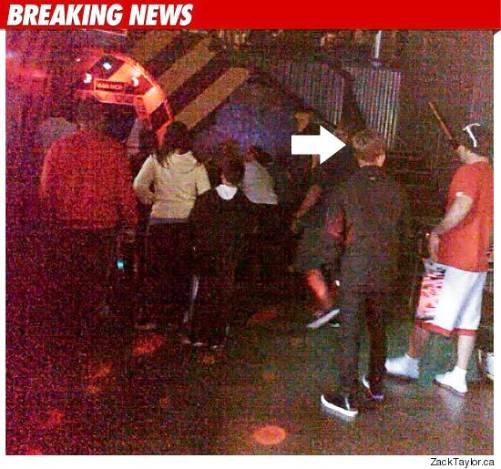