Kanye West is in the news again! Yay!! It’s just what his ego ordered!

This time around West is whining about Walmart banning the cover of his new album, “My Beautiful Dark Twisted Fantasy” because it’s too graphic. Scroll down to see it, but don’t get mad at me if you’re offended.

I don’t take any offense to the artwork, but I understand why a family place like Walmart would object to a picture of two monster-looking things humping.

In usual Kanye style, he took to Twitter to vent his frustration.

“Banned in the USA!!! They don’t want me chilling on the couch with my phoenix! http://twitpic.com/2ykxjk”

“In the 70s album covers had actual nudity… It’s so funny that people forget that… Everything has been so commercialized now.”

“In all honesty … I really don’t be thinking about Wal-Mart when I make my music or album covers #Kanyeshrug!”

“I wanna sell albums but not at the expense of my true creativity.”

Hey Kanye, I know you don’t want your creativity to be stifled, but your bitching is becoming quite annoying. Seriously. 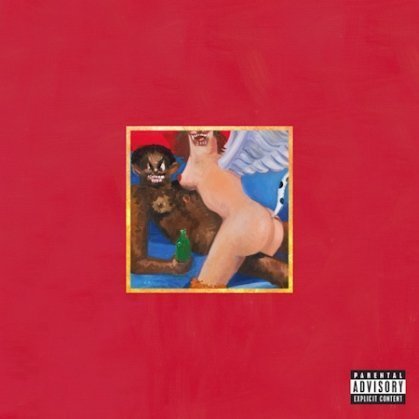