I had no idea Blake Lively has two half-sisters, did you? Did you know she got the part of Bridget in 2005’s Sisterhood of the Traveling Pants without even auditioning? Yeah, me neither.

In fact, the tall blonde with legs up to heaven comes from a whole family of showbiz folk.

Fun facts about Blake Lively I bet you never knew:

She is also the sister-in-law of actor/director/writer Bart Johnson.

Blake Lively’s first role was Trixie the Tooth Fairy in the 1998 movie Sandman, which was directed by her dad.

Getting the part of Bridget in Sisterhood of the Traveling Pants was a breeze for Blake – she has revealed that she simply walked in and left a photo of herself with the casting people.

Blake attended public school for her senior year of high school in order to be a regular teenager. She was class president, a cheerleader, and performed with the school’s national championship show choir.

According to Blake, she and boyfriend Penn Badgley – who is also her Gossip Girl co-star – have known each other since she was 11-years-old.

Blake Lively and her sisters Lori Lively and Robyn Lively at this year’s Spike TV’s Scream Awards. Those Lively girls are some good lookin’ chicks! 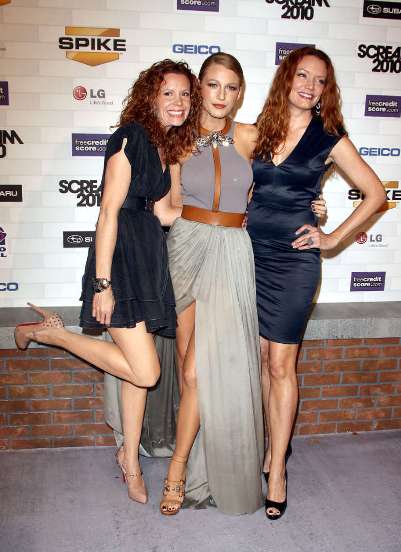