I’m not sure why I find this so funny. It’s actually probably more of a jab than anything else.

Paquin’s competition, by the by, was Emily Blunt for The Wolfman, Emma Stone for Zombieland, Julie Benz for Dexter, and Milla Jovovich for The Fourth Kind.

No one from The Vampire Diaries was even nominated. Maybe that’s why they presented! Very interesting.

As consolation for all you die-hard fans of The Vampire Diaries, how about a chance to win the soundtrack!

All you have to do is visit Accidental Sexiness and put in your two cents on which relationship results you’d like to see on The Vampire Diaries by the end of season two.

Let us know what your hopes are and why. The five best answers win a copy of the soundtrack courtesy of Warner Bros and AccidentalSexiness.com. 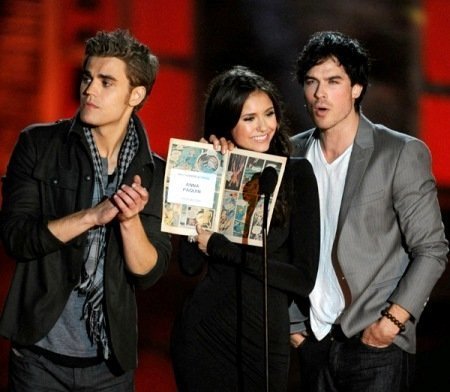