Lindsay Lohan appeared in court this morning to answer to her latest probation violation, and girlfriend looked tore back!

Lindsay Lohan was just ordered back to rehab until at least January 3, 2011 — no jail time.

Lohan is due back in court on February 25. She will be subject to drug testing in between her release from rehab until her court date.

The D.A recommended Lindsay get 180 days in county jail. The judge specifically stated he wanted Lindsay in rehab past the new year.

The judge said to Lindsay at one point, “You are an addict. I hope you understand that.” Lindsay nodded her head in agreement.

Lindsay’s estranged father, Michael Lohan, sat on the opposite side of the court from Lindsay’s mother, Dina.

Lindsay was in tears at the end of the hearing and simply told the judge, “Thank you.”

Our reporter in the court said Lindsay showed off her SCRAM bracelet to her mother during the hearing and motioned as if she really wanted it removed. We’re told that will happen soon.

Lindsay was most likely sent back to rehab instead of jail because, and the judge put it, he does not “want a train wreck” – and if Lindsay was in jail and then released, that would surely happen.

This is clearly the best thing for Lindsay Lohan. 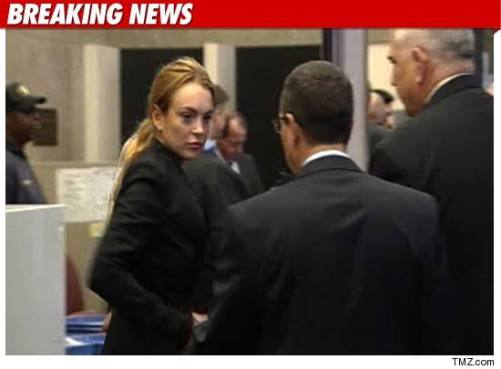 Upon leaving the court building – flanked by men from Betty Ford and cops – Lindsay Lohan did not speak and headed straight to her car.
So does this mean we won’t hear from Lindsay Lohan until 2011? How on earth will we survive??