There are new cheating rumors surrounding Justin Timberlake and Jessica Biel. This time the woman Justin allegedly had an affair with is actress Olivia Munn.

According to reports, Timberlake and Munn had a steamy 3-day affair this past September when Biel was out of town.

It’s known that Olivia Munn, 30, a Daily Show correspondent and star of the upcoming NBC series Perfect Couples, and Justin Timberlake, 29, met on September 26th at a MySpace event.

What happened after that if pure conjecture. But here’s how the story goes…..

After exchanging numbers with Munn, Timberlake “started chasing her immediately.” At first she resisted his advances, telling him anything between them was out of the question if he and Biel, 28, were still together.

Sources close to the couple say Justin Timberlake has told people he and Jessica Biel are over, but “the reality is he’s just doing it behind her back.”

Apparently Olivia Munn believed Justin and agreed to go out with him. And by “go out” I really mean she took him to her hotel, the Gansevoort Park Avenue NYC, and “had amazing sex” with him all night long. They were also said to be “openly affectionate” while at the hotel together.

Obviously Justin Timberlake’s people are denying all allegations of cheating; Olivia Munn’s rep does not comment on her personal life. 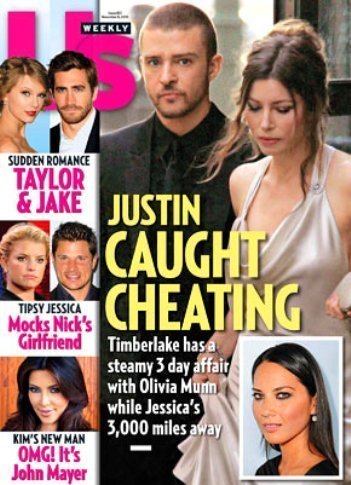