Oh joy! We can all rest more easily now. Mariah Carey and husband Nick Cannon have finally admitted what we’ve known for quite some time – the b*tch is knocked up!

“Yes, we’re pregnant, this is true. It’s still early, we’re expecting in the spring,” said Carey, confirming rumors that had been swirling for several months.

“It’s been a long journey, but it’s been tough because I have been trying to hold on to a shred of privacy and that was not easy,” said Carey.

You gotta hand it to her, she did a pretty could job of hiding it (ha!). But you can’t blame “I’m just fat” forever; eventually the baby will pop out.

Joined by Nick Cannon, Mariah Carey, 41, sat down with Billy Bush – telling him he was literally the first person she was talking to about this (take that Ryan Seacrest!).

Carey also said the reason she kept the news of this pregnancy to herself is because of a miscarriage she suffered shortly after their 2008 wedding in the Bahamas. She was about one month along.

Now that the rumors of pregnancy can be put to bed, the rumors of the baby’s sex and due date will begin. The chatter around town says they’re having a boy, but according to Nick Cannon, they don’t know what it is.

“There’s no truth to that. We don’t know the sex of our child,” Cannon, 30, said on his radio show Thursday morning. “But it’s strange how that stuff comes out at almost the same time.” [source] 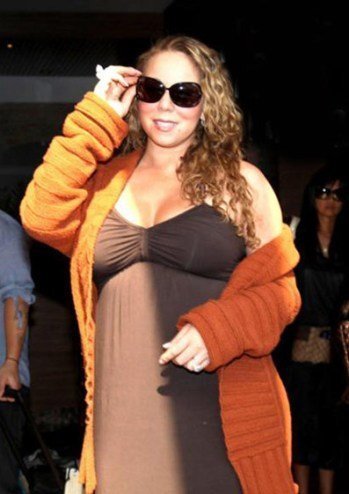