Nothing like an accomplished athlete dying at the age of 32 to make me feel like I haven’t done a single worthwhile thing in my life.

According to reports, the 32-year-old was en route back to his home in Hawaii from a competition in Puerto Rico where he had fallen ill, and decided to spend the night in a hotel room.

Although the local medical examiner says no official cause of death has been named, the Irons family released a statement saying that Andy “had reportedly been battling with dengue fever, a viral disease.” 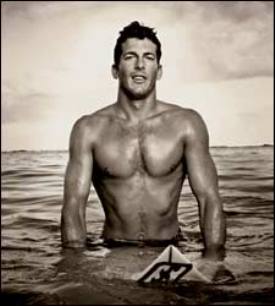 Aside from the tragedy of being 32 and suddenly dying, Andy Irons leaves behind his pregnant wife Lyndie who is due to give birth next month.

The family’s statement begins: “The world of surfing mourns an incredibly sad loss today with the news that Hawaii’s Andy Irons has died. Andy was a beloved husband, and a true champion.”

Irons, who was born and raised on Kauai, pulled out of the Rip Curl Search Puerto Rico on Sunday, citing an illness he contracted during the previous contest in Portugal.

Billabong, Irons’ primary sponsor, posted a tribute page on its website, which includes this statement: “Andy was one of the greatest surfers of our time. More than that, he was a much loved son, a devoted husband and a soon-to-be father. The thoughts of all Billabong employees worldwide are with wife Lyndie and Andy’s family at this most devastating time.”

This is such a tragedy, on so many levels.