I just had to go and open my big mouth, didn’t I?

I am so sorry you guys. I didn’t realize that by simply wondering what Heidi Montag and Spencer Pratt were up to, it would throw them on us again.

According to Heidi Montag and Spencer Pratt, the couple is totally broke and facing bankruptcy. Oh, and they’re homeless.

“We were immature, worrying too much about the famous part instead of the business part,” Life & Style reports Spencer as claiming. “In hindsight, we shouldn’t have spent any money. We should have saved. We spoke to a bankruptcy attorney and I’ve looked into unemployment checks.”

Unemployment checks? Are you f*cking kidding me??

Heidi and Spencer claim that in the four years they spent “working” on television, they both earned $10 million. They then promptly spent it on useful things like Heidi’s singing career (ha!), which cost them about $40,000 per song, renting a mansion in Malibu for $3,500 a month, and of course the hundreds of thousands of dollars spent to purposefully make Heidi look the way she does.

On top of all that, they’ve got six cars, fly on private jets, and owe the government $2 million in back taxes.

“We thought The Hills was going to be like 90210 and we’d have 5-10 years,” Spencer whines. “But we never saw Jersey Shore coming. Our cast was a bit boring by comparison. No wonder we got canceled.”

Heidi says things got so bad she considered shedding her clothes for Playboy and actually posing nude, something she once said she would “never” do.

Spencer’s parents, apparently, weren’t too keen on the idea and offered to let the couple stay in their guest house free of charge if Heidi kept her nakedness out of the public eye.

“I feel like I’m 14 again,” says Spencer, now 27. “My parents are my lifeline. But we don’t want sympathy. We did this to ourselves and feel like idiots. But we’ve grown up and are definitely not as naive anymore.”

I don’t know if they’ve actually grown up, but I know they’re still idiots.

This is a picture of Heidi Montag and Spencer Pratt in Las Vegas this Halloween – he dressed up as an alien and she dressed as herself. Is it just me, or does Heidi Montag look a little chunkier than usual? Not that there’s anything wrong with that – it’s just something I noticed. 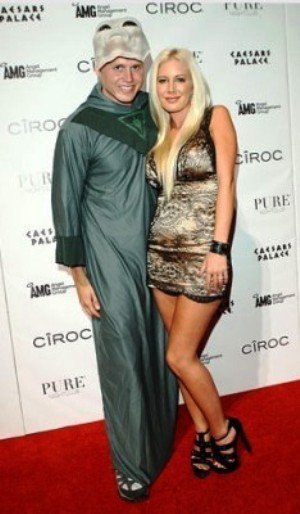