It’s no secret that I’m not exactly a fan of LeAnn Rimes, and quite honestly I could give a rat’s ass about her upcoming interview with Robin Roberts for All Access Nashville. However, some of the quotes that have leaked should really be shared – if for no other reason than to support my theory that LeAnn Rimes has no conscience.

In the interview, LeAnn basically says there was nothing wrong with her having an affair with now-boyfriend Eddie Cibrian because, “It happens every day to so many people.” She also claims that no one would care if she wasn’t famous.

“If I take away my album sales, my words … you have just another couple. You had two couples whose marriages didn’t work who really stumbled upon each other and fell in love,” she says. “I can’t change [critics’] minds. Nothing I’m going to say is going to change it. I do know that and I have accepted that.”

You’re right LeAnn, we probably wouldn’t talk about you being an admitted adulterer if you weren’t famous. But you are, so we do. And maybe you should have thought about that before you got caught on tape kissing a married man while you were married. Just sayin’.

Rimes says she doesn’t want to be defined by the affair. “What happened is not who I am, period,” she says. “But I do know how much I love him. So I’ve always said I don’t live my life with regret. I can’t.”

Adds Rimes, “We’re really happy in what we feel privately. We hope [that] one day, I think people will feel publicly.”

Yeah, except when we see them publicly all we can think about is their infidelity. And the total lack of remorse from both LeAnn and Eddie is just disgusting.

“The truth is that we’re human beings,” [Eddie Cibrian] says. “We make mistakes and we learn from them, but we’re human. We fell in love.

“We’re talking about something that’s over a year, year and-a-half old, really, and we’re still together, and we’re madly in love,” he goes on. “And I think people are finally seeing that, but it doesn’t mean that people will accept it or the tabloids will stop trying to print lies and try to tear us apart or tear us down.”

Hey buddy, slow down there. We’re not printing lies. We’re just calling it like we see it. 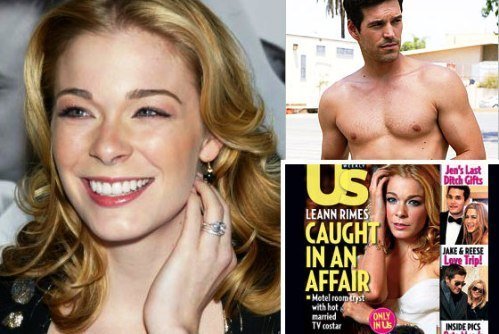