People Magazine is reporting that Nick Lachey and his longtime girlfriend Vanessa Minnillo got engaged on Thursday after Lachey, 36, proposed “near a beach” in California. He presented Minnillo, 29, with an Asscher-cut diamond with baguettes from Bader & Garrin.

“We’re excited and incredibly happy about our engagement and we look forward to a wonderful future together,” the longtime couple announced in a joint statement.

Thursday afternoon Nick Lachey shared his joy with the world via Twitter. That is so two thousand ten!

“Hey all. If anyone’s heard the rumors of my engagement, they are absolutely true! Vanessa and I couldn’t be happier. Thanks for all the love.”

By all accounts, the couple – who began dating in 2006 and briefly broke up in 2009 – are happy has clams. I bet Vanessa is super happy, since she’s made no secret of the fact that she wants to get married.

“Once again it looks as if I’m always the bridesmaid but never the bride,” she said, gently ribbing Lachey last year.

So how long before the rumors of a super-depressed and getting-fat-again Jessica Simpson start? I can’t imagine she’s happy about this. I bet she’ll go out this weekend and make a spectacle of herself with her new boyfriend to prove how happy she is. 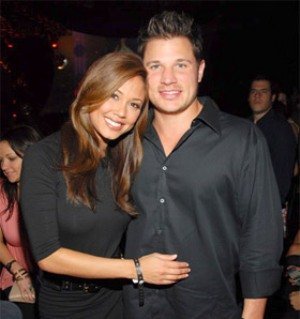