Don’t worry all you Maksim Chmerkovskiy fans, she’s not engaged to her fellow Dancing With the Stars pro again. It’s some other dude.

Is it just me, or does Karina Smiroff get engaged to all of her boyfriends? Wasn’t she going to marry Mario Lopez at one point, too?

Professional dancer Karina Smirnoff, 32, and St. Louis Cardinals pitcher Brad Penny, 32, are getting hitched. (Holy crap! They’re my age. She looks sooo much older than I do. Ha!)

The dancer — who most recently competed on DWTS with Mike “The Situation” Sorrentino — says Penny asked for her hand in marriage in October after she and Sorrentino performed the foxtrot.

“I was in the middle of the show and had no clue what was cooking behind my back,” Smirnoff tells Us, adding that the proposal happened at what she thought was a business meeting. “The dinner meeting was set up at a restaurant in Malibu. When [my manager and I] got there, it was completely empty. She excused herself to take a call and while I was sitting there alone, Brad came in.

“I had crazy hair and black lipstick on and was just concerned about looking like the Bride of Frankenstein,” she continues. “Even after Brad got down to one knee and opened the box with the ring, it still didn’t register.”

…“I’m the happiest I’ve ever been and Brad is the sole reason for that,” Smirnoff tells Us. 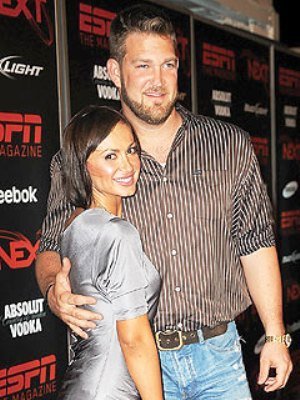