Well that was fast.

Within days of announcing her split from music producer husband Jordan Bratman, singer Christina Aguilera was linked to go-to Hollywood lesbian Samantha Ronson. But she must have just been getting something out of her system, but she’s back to boys.

The pair [was] spied on Friday, sharing a double date with Nicole Richie and Joel Madden at ‘SoHo’ in West Hollywood. And Christina was strangely keen to keep him away from the cameras;

“It’s not serious yet, but it’s something she’s finding comfort in,” a friend tells People. “She and Jordan were having problems for a long time. She met Matt on the set and leaned on him as a friend. After she and Jordan separated, that friendship turned romantic.”

“Being a great mom to Max is the most important thing in her life,” the friend assures us.

In a convenient coincidence, Burlesque opens on November 24. And a story of a supposedly secret romance should do its box-office prospects no harm at all… 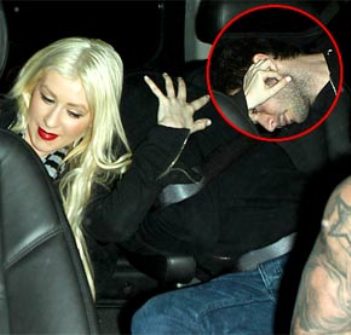