It’s always nice to see a scorned woman fall in love and find happiness once again; especially when her heart was broken in such a nasty way.

In May 2008, Shania Twain’s husband of 14 years, Robert “Mutt” Lange up and left the country singer for her best friend, Marie-Anne Thiebaud. Of course Mutt and Marie-Anne denied the affair, but no one really believed them.

Fast forward to August 2009 when Shania Twain confirmed her budding relationship with Frederic Thiebaud, after they were spotted vacationing together in Canada, Florida, and New York City.

…referring to her fiancé as “a dear friend and true gentleman” and writing that he had “been the most constant companion and support for both [her son] Eja and I. And having gone through the suffering of his family splitting apart at the same time and under the same extreme circumstances, he understands me better than anyone.” [source]

According to reports, Thiebaud asked Twain to be his wife about two month ago while in Switzerland, presenting her with a three-carat solitaire diamond ring.

Twain stepped out with Thiebaud at Serafina’s Fabulous Grill in NYC on Thursday with an enormous engagement ring.

“I’ve never seen Shania so happy,” the singer’s friend tells Us Weekly. “She has ended up with the love of her life.” 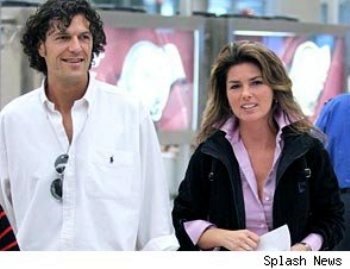