Can’t a girl get her rehab on without some crazy nurse Ratchet bitch accusing her of assault? I mean really!

Lindsay Lohan has been accused of assaulting a female staff member at the Betty Ford Clinic, and the chick wants Lindsay to be prosecuted.

According to law enforcement sources, the Palm Desert Police Department is currently investigating an alleged altercation that took place after Lindsay Lohan and her roommates reportedly returned to the center past curfew, after spending some time at a bar.

Some reports claim the altercation occurred after the female staff member asked Lohan to take a drug test.

For her part, Lindsay Lohan is admitting some shoving took place, but she denies she started it.

Lindsay claims when she walked into the BFC — a female staff member was “unfairly” scolding her about the situation … and demanded the actress take a drug/alcohol test. We’re told it was during the heated exchange that the woman “put her hands on Lindsay.”

Lindsay claims she told the woman, “Take your hands off of me” and then “pushed back.”

…We’re told Lindsay feels the staffer has had it out for her for a while … and with LiLo reaching the end of her stay at the clinic, the actress believes the staffer was looking for a final confrontation.

Oh man, I totally know how that goes. About two weeks before I moved out of the dorms at the end of my sophomore year at Humboldt State University, my best friend and I were written up by our Resident Advisor for a noise violation – at 3:00 p.m. on a Saturday. The stupid bitch had been trying to get us on something *cough* the whole year *cough, cough* and never could. A few weeks after leaving the school I received a letter about the violation. Needless to say I proved it was unwarranted.

M y punishment would have been fine, but Lindsay Lohan could actually end up back in jail if things with this assault charge move forward.

One of the terms of the probation is “obey all laws’ — and if Judge Elden Fox decides LiLo committed a battery at the BFC, he could send her back to the slammer for 180 days. [source] 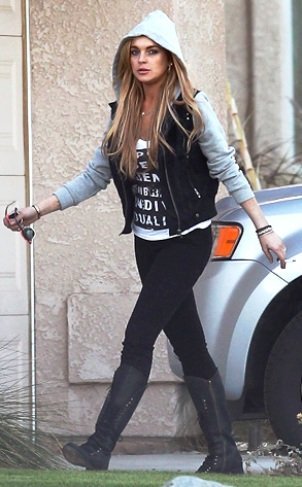