I think Denise Richards is in love with Heather Locklear.

First, Richards started dating Locklear’s ex, Richie Sambora, like a day after the couple broke up. And now Denise Richards is dating Nikki Sixx – the bassist for Mötley Crüe; the same Mötley Crüe for which Heather Locklear’s other ex-husband, Tommy Lee, was the drummer.

It’s like Denise Richards knows she can’t have Heather Locklear, so instead she hooks up with men who are in Locklear’s life.

Makes me sort of wonder what was really going on between the two when Denise and Heather’s friendship bit the dust.

And didn’t/doesn’t Heather Locklear have a jacket like this? 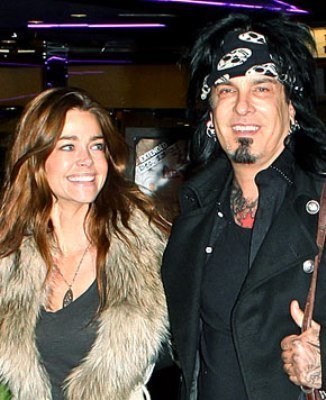 … “[Richards] was the one who told Heather to file for divorce,” an insider told the mag. “Now it looks like she had an ulterior motive.”

The Sheens and the Samboras were neighbors in Westlake Village, a ritzy area in Los Angeles’ San Fernando Valley. After both couples split, the hubbys moved out, but the wives stayed in the houses. The friendship, however, is kaput.

“Heather thinks Denise is the worst kind of woman — a backstabber,” a “pal” told the mag. “She wants nothing to do with her ever again.”

Don’t make me come get you!