I’m sure you’ve heard by now that annoying bulgy-eyed Camille Grammer is threatening to leave Real Housewives of Beverly Hills because she doesn’t like the way she’s being portrayed.

There is nothing more pathetic than someone who constantly plays the victim – especially when they’re also highly irritating and hypocritical.

I have made no secret of my distain for Camille Grammer; her face bugs me, she’s whiny, and her fake boobs look really bad.

A few months ago Camille claimed that Kelsey Grammer convinced her to do Real Housewives of Beverly Hills, and that she never really wanted to do it. Then she basically blamed the show for Kelsey cheating on her.

Now that Camille Grammer has flung herself into the spotlight by threatening to leave the show, she’s got a whole new host of reasons to play the victim. And she was all too eager to share the woes of her hard life with People magazine.

“It’s like a runaway train that’s out of control,” Grammer says. “I’m going through this divorce in my private life, and this on top of everything else has been really hurtful. I don’t know where it’s coming from.”

Poor Camille, she’s just a sweet girl who’s nice to everyone and just wants everyone to get along. But her life is so hard – she’s got two kids and only four nannies, she’s always super busy and tired, she’s so misunderstood, blah, blah, blah.

“Even the nanny controversy, I have to laugh about it, because that was Kelsey’s decision to hire the four nannies. And I’m taking all this heat for it,” Grammer says. “It’s almost as if, on the show, he had nothing to do with our life together. We were married! We made these decisions together.”

So Camille and Kelsey made the decision together to have three too many nannies, but when it came time to decide whether or not to do Real Housewives of Beverly Hills, that was all Kelsey. 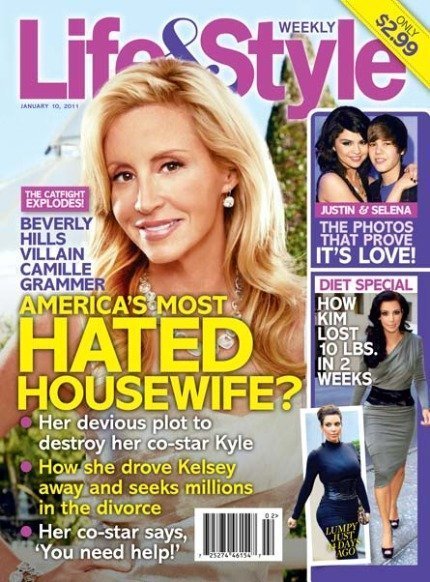