Apparently Regis Philbin doesn’t see things that way, or he just plain doesn’t care, because today on Live With Regis And Kelly he announced to the world – and Kelly Ripa – that he’s leaving the successful morning talk show.

Reportedly, the 79-year-old told co-host Kelly Ripa just 15 minutes before the show aired that he was retiring from morning television after almost three decades. Sources close to Philbin are saying that Regis was afraid that if anyone knew what he was planning, the news would be leaked before he was ready.

Regis Philbin isn’t going away just yet, however. He’ll continue to do Live With Regis And Kelly into the summer. No official date of his last show as been given, and no one has been chosen to replace him as of yet.

“I have to tell you this because it’s going to happen and the station needs to know and [executive producer Michael Seth] Gelman needs to know and we all need to know. But this will be my last year on this show,” said Philbin. “… It’s been 28 years since I’ve been here and it was the biggest thrill of my life to come back to New York where I grew up as a kid watching TV in the early days. …And look at this over here,” he said referring to his co-host of 10 years, Kelly Ripa as he put his arm around her.

“I think I can only speak for America and all of us here when I say it’s been a pleasure and a privilege and a dream come true and I wish I could do something to make you change your mind,” said Ripa.

Between you and me, I think Regis should have retired a few years ago. And I seriously doubt Live can last without him. 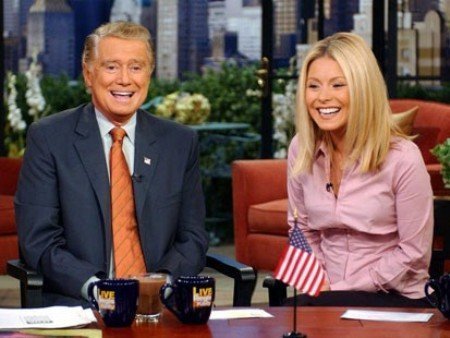