Last October it was reported that Justin Timberlake cheated on Jessica Biel during a hot and heavy 3-day affair with Olivia Munn. At the time, reps on all sides denied the rumors, and we all moved on with our lives.

Now the rumors are back.

According to the reports this time, a source is telling Life & Style magazine that Justin Timberlake has been in contact with Olivia Munn again, texting her that his “relationship is over.”

Justin Timberlake and Jessica Biel have been together for four years. Last year, Jessica referred to their relationship as “the most precious thing in my life.”

Justin Timberlake is up to some old tricks in the New Year. Though he denied reports last fall that he cheated on longtime girlfriend Jessica Biel, 28, with actress Olivia Munn, Life & Style has learned he’s still reaching out to Olivia. Over New Year’s weekend, an insider reveals, the Perfect Couples star, 30, was showing her phone to a few friends. “She had several new text messages from Justin on it,” the insider says. “They’d all been sent very recently, the last few weeks of December.”

And they were hardly innocent. “One said, ‘My relationship is basically over,’ ” says the insider to Life & Style. “The other said, ‘I’m thinking about you.’ There was part of a third that said something like, ‘You don’t understand how hard it is.’ I didn’t see that entire text, so I’m not sure how that sentence ended.”

A rep for Justin, 29, declined to comment. Olivia, says the insider, is texting back – yet keeping her distance. “She’s super flattered,” says the insider, “but she’s not stupid. She’s not expecting it to go anywhere – but she’d love it if it did!” 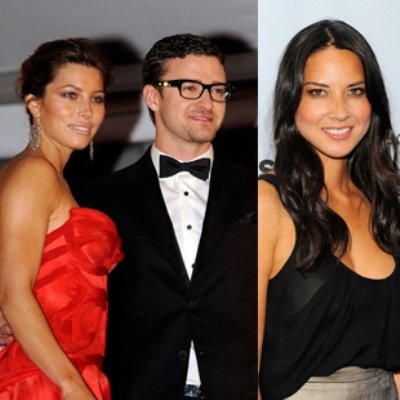