Truer words have never been said. And I must admit, it’s one of my favorite quotes from the first season of Real Housewives of Beverly Hills – which airs its final episode before the 2-part reunion tonight, by the way.

Well now she’s claiming that it was all a big joke and she was kidding when she threw Kelsey under the sexless marriage/cross dressing bus.

During her appearance on the George Lopez Show Tuesday, Camille Grammer insisted that it was all a big joke.

“I don’t regret anything I said on Howard Stern,” the Real Housewives of Beverly Hills star, 43, said during a Tuesday appearance on the George Lopez Show. “I just regret that people don’t take it as a joke. They take it so seriously. We were just being funny and having a good time.” [source]

You know what Camille? We might have taken it as a joke if you actually had a sense of humor and said funny things all the time. Which you don’t, so we didn’t. So there.

Look at her eyes. And those lips! The woman doesn’t have a single comical bone in her body. 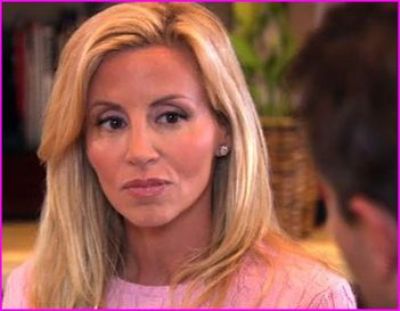