You know what made Joan Rivers the iconic comedienne she is today?

Being controversial and pissing people off! So when she blamed Sarah Palin for the Arizona shootings and told FOX News that they could go f*ck themselves, she was just doing her job. Get over it!

FOX News gets all whiny when people say they suck at being unbiased, and then they go and cancel Joan Rivers because she made a joke about Sarah Palin.

The comedienne and red carpet host tweeted on Wednesday with her immense displeasure with FOX News, whom she said banned her after saying on Sunday night that network contributor Sarah Palin deserved blame for the shootings in Arizona and that she “is just stupid and a threat.”

While @melrivers and I were promoting our new @wetv reality show, I made a joke about Sarah Palin that was picked up by @TMZ.

As a result, our appearance on the Fox News Channel tomorrow morning has been cancelled.

Outcome: DON’T PISS OFF SARAH PALIN. She’s apparently “very powerful,” and is obviously still smarting from the end of her reality show.

I was cancelled from Fox for saying Palin is “stupid and a threat”. Wait till I REALLY shock them with Aretha Franklin is a bit chubby!

Her outrage didn’t end there. Speaking to Rob Shuter of PopEater on his show for HDNet, Rivers was asked whether she would go on the air if FOX asked her back. Her response?

That FOX can “go f**k themselves.”

Joan is also apparently peeved over her mis-placed Dancing With The Stars votes.

“I actually voted for her terrible daughter over David Hasselhoff,” she says. “I should’ve voted for David; they both sucked as dancers.” [source]

I hope Joan Rivers stays bitchy and sassy until the day she dies. Although she could lay off the 6-inch heels; they make her look ridiculous. 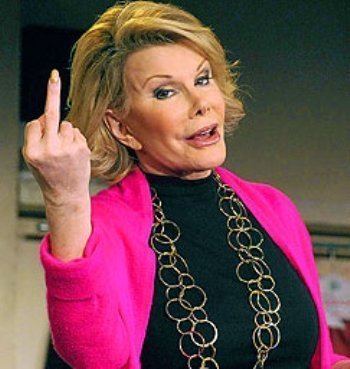