Kelsey Grammer has already humiliated Camille Grammer by dumping her in an oh-so-public way, and now he’s kicking her while she’s down.

While Camille has been bitching and whining about the demise of her marriage, Kelsey Grammer has been busy running all around New York gushing over his fiancée Kayte Walsh.

During his appearance on Live with Regis and Kelly to promote his Broadway play La Cage Aux Folles, Kelsey credited Kayte with improving his life and making him feel warm and fuzzy inside.

“I’m doing great, I started doing this [the play] when I needed a change,” he said. “This year’s journey is about enhancing love in my life, and Kayte is responsible for a great deal of that.”

The five-time Emmy winner, 55, who’s trying to rush his divorce with estranged wife Camille so he can remarry next month, went on to say that he and Walsh are heading on a cross-country road trip where he’ll let her pick the music.

Kelsey talked about his four children (two with Camille, and one each with exes Doreen Alderman and Barrie Buckner) getting involved in the film industry, but said nothing about The Real Housewives of Beverly Hills star, 42, or how she learned of his affair with Walsh while filming the show. 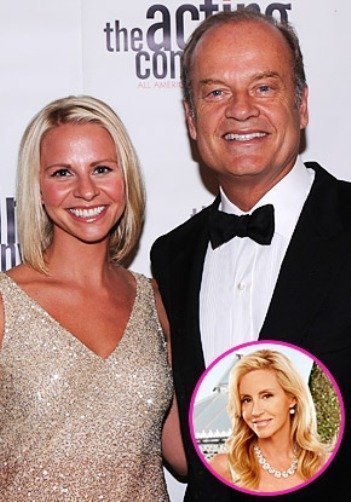