Except it’s between two dudes; so I guess it’s a cock fight?

First Charlie Sheen trashed the executives of Two and a Half Men during a radio phone interview on The Dan Patrick Show. He claimed he attempted to go back to work, as was discussed, but when he got to the studio, there was no work to go back to.

Sheen explained, “[The execs] said ‘You get ready and we’ll get ready’ … and I got ready and went back and nobody was there … I don’t know what to tell ya.”

Then the creator of Two and a Half Men, Chuck Lorre, shot back at Charlie Sheen, posting a 2-second slate with a special message at the end of Monday’s episode of the show.

I exercise regularly. I eat moderate amounts of healthy food. I make sure to get plenty of rest. I see my doctor once a year and my dentist twice a year. I floss every night. I’ve had chest x-rays, cardio stress tests, EKG’s and colonoscopies. I see a psychologist and have a variety of hobbies to reduce stress. I don’t drink. I don’t smoke. I don’t do drugs. I don’t have crazy, reckless sex with strangers.

If Charlie Sheen outlives me, I’m gonna be really pissed.

It’s not the first time Lorre has used the slate to put in his two cents on the Charlie Sheen drama – a few weeks ago, he ran a message that read:

“Do not attempt to replicate what you saw in tonight’s episode of Two and a Half Men … Please keep in mind that we employ a highly-paid Hollywood professional who has years of experience with putting his life at risk. And sadly no, I’m not talking about our stunt man.”

Charlie, by the way, apparently isn’t bothered by Chuck Lorre’s jab, and simply wants to get back to work.

The rehabbing Sheen sent a message to Lorre via TMZ:

…Charlie also reiterated his urge to get back to work … telling Chuck, “Get off those other shows. Get back to the one that launched those.” 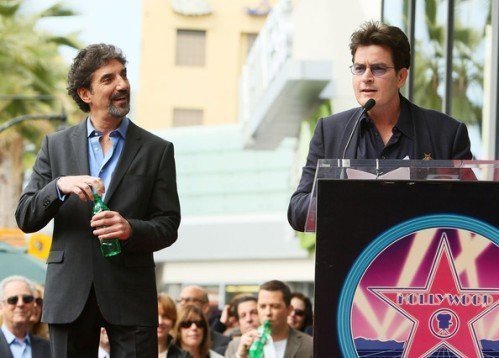