Charlie Sheen was on the Dan Patrick Show again this morning, saying he’s ready to get back to work, but he’s thankful for the much-needed time off. He also gave props to his network for basically saving his life.

When asked if CBS made the actor stop working so he could get healthy, Sheen first paused to take a quick drink of water for his dry mouth.

…He joked that people would be thinking, “‘Oh my god, what does he mean a dry mouth? He’s smoking crack again.’”

On a more serious note, the actor said he is “supremely grateful” for the support he’s gotten from network, which shut down production of Two and a Half Men so the star could recover.

“People need to understand how supremely grateful I am that somebody stepped in here,” he said. “Basically, Viacom showed up at my house and said, ‘Dude, dude, it’s getting really obvious and we’re really worried about you … We care about your health. They came in and man to man said, ‘We have to shut it down.’ This was the only person in my life with the power to do this.”

Charlie Sheen went on to admit that while he had “never been drunk – [and] never been high on the set once,” he did show up looking haggard.

…he confessed he’d been showing up in rough shape without having slept and would ask the director to move his mark so he could lean on a piece of furniture for support.

With all of that now supposedly behind him, Sheen is ready to get back to work. And dispense advice to fellow struggling addict, Lindsay Lohan.

He also offered up a bit of advice for another troubled star, Lindsay Lohan. “Work on your impulse control,” Sheen said. “Just try to think things through a little bit before you do them.” 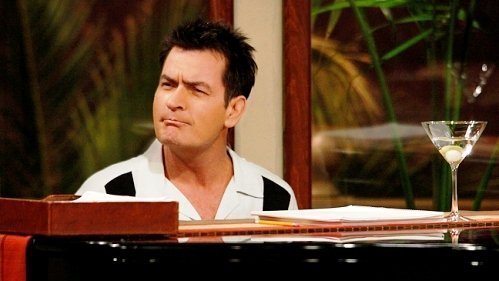