Home
Hollywood Gossip
Check Out The New Wonder Woman. Now Excuse Me While I Gag.

What the flying freak frog? Someone in costuming over at NBC needs to be fired. Seriously.

Since bringing back old sh*t is the trendy thing to do right now, NBC has decided they’re going to take a crack at things with a revamped Wonder Woman.

Adrianne Palicki, whom I’ve never heard of, will be leading the cast as Diana Prince, aka Wonder Woman. She will be joined by Cary Elwes as the CEO at Diana’s company, Themyscira Industries, and Elizabeth Hurley who plays a villain running a pharmaceutical company creating a drug that makes people stronger; the show is being produced by David E. Kelley.

If the series is picked up, NBC says the show will be a serious, non-campy take on the iconic cartoon character.

While I don’t think the granny panties Lynda Carter sported in the original 1970s TV series need to be brought back, I’m not really feeling the skin tight blue shiny legging things and blue hooker boots either. And what is up with melon boobs and headband that is totally upside down?

Do details mean nothing these days??

She adds, “I’m sure there will be people who say she looks better than me and like her better than me – and that’s also fine,” she says. “I want this story to be told again. I’m really excited. I can’t wait to see it.”

Well you and I are just going to have to disagree there, Ms. Carter, because I don’t think your red boots can be filled by anyone. Especially not by some chick with a huge egg head and the wrong colored shoes. 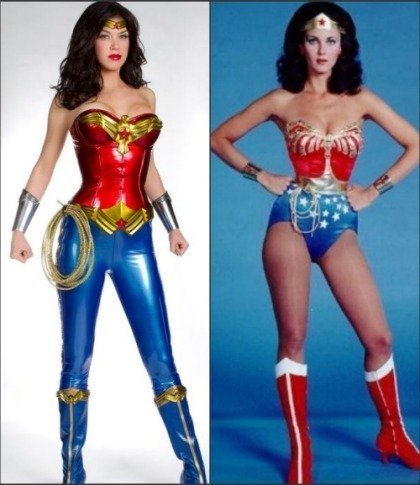