In April 2010, reality star and Poison frontman Bret Michaels came thisclose to death after suffering a horrific brain hemorrhage. He recovered and went on to win Celebrity Apprentice, have a “warning stroke,” go on tour and basically have an overall resurgence of his life and career.

You’d think Michaels would be grateful to be alive and feel blessed for all the many riches that have been bestowed upon him, but no; he’d rather find someone to blame for all the bad stuff.

And that blame, Bret Michaels has decided, should be placed on the Tony Awards. Stay with me here…

In 2009 Bret Michaels had just finished performing live at the Tony Awards when he turned to leave the stage and came face-to-prop with a swinging piece of stage scenery when he was whacked in the face; the force of the hit knocked him right off his feet.

It was six months later that the hemorrhage hit, nearly killing the rocker.

In the lawsuit against Tony Award Productions and CBS, Michaels and his legal team argue that “One of the most common causes of this type of hemorrhage is head trauma — exactly like the one Michaels suffered at the hands of the Tony Awards.”

The rocker blames producers for not instructing him how to safely exit the stage, but — his suit says — producers have “failed and refused” to remedy the situation and even blamed him for the accident, saying he “missed his mark.”

Bret also suffered a few lacerations to his face….. 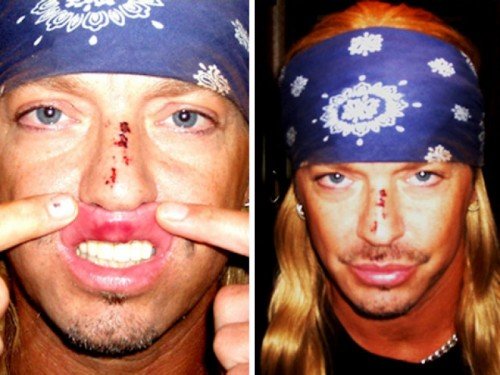