Oooooh!!! Someone’s gonna get it!!

Although, if she’s smart (ha!), Lindsay Lohan will stay home and far away from the airport when Samantha Ronson lands in New York later today.

Rumor has it, Lindsay wants to confront her ex-girlfriend about pictures that have surfaced of Sam making out with a random chick in Los Angeles Thursday afternoon.

According to sources close to Lindsay, even though she and Sam are not officially dating, Lohan was under the impression that Ronson wasn’t seeing anyone else. Now Lindsay is butt hurt and feels betrayed.

Sources also claim this blow is extra hard on Lindsay because Samantha recently told Lindsay those three special little words – even her telling her “I love you” as recently as Friday morning.

I’m just going to throw this out there, but I think Lindsay has a couple other things she needs to be worrying about other than who her ex-girlfriend, who she’s not even back together with, is kissing. You know, like the numerous court battles Lindsay is facing over the next couple of months and the very real possibility that she could spend a significant amount of time behind bars.

Maybe it’s just me, but I’m thinking it would be best for Lindsay Lohan to let this whole kissing pictures thing go and focus on what’s really important right now.

Lindsay Lohan and Samantha Ronson were all smiles a month ago….. 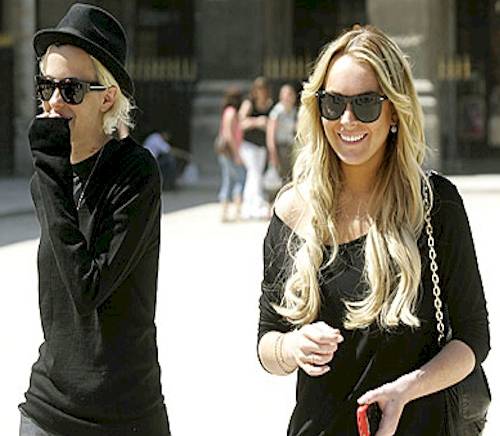