Dear Adam Lambert: When you’re someone’s guest at someone else’s party, you probably shouldn’t show up twenty sheets to the wind. And you certainly shouldn’t make such an ass of yourself that you are permanently removed from the shindig.

Apparently Adam Lambert needs to take a few etiquette classes, because the “For Your Entertainment” singer committed many a faux pas at Lady Gaga’s 25th Birthday Party.

There as a guest of the Scissor Sisters, Lambert arrived already completely hammered. According to witnesses, he acted like a crazed maniac; first fist-pumping so hard he punched a hole in the ceiling, then later trying to smash cake in Lady Gaga’s face. It was around that time that Gaga’s people forcibly requested that Lambert leave the party, which was being held at the La Cita Mexican Restaurant in Los Angeles.

One of the guests who was privy to Adam Lambert’s behavior is Perez Hilton, who told L.A.’s 97.1 FM that Lambert was “super sloppy embarrassingly drunk,” and that he attempted to serenade Lady Gaga as she was being presented with her cake “like he was auditioning for Idol again!”

While the birthday girl has not commented on the events of Sunday night, Lambert tweeted about it on Wednesday.

“My hand still hurts. LoL,” he joked. “Was trying for celebratory gesture 4 gaga’s B- piñata style…instead my fist is all bruised and la cita has a hole in the ceiling. #sloppy.” [source]

I think it was a little more than just sloppy. It was also incredibly rude and disrespectful to Lady Gaga, the other party guests, and La Cita – not to mention the Scissor Sisters who brought Lambert to the party in the first place. 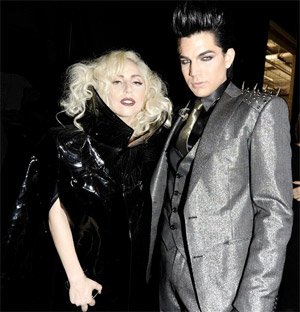