So Kevin Federline is having baby number five this year, and I just know you’ve been waiting with bated breath to find out whether Victoria Prince will be popping out a girl or a boy.

Well wait no longer, my friends – joining three brothers and a sister, this latest Federline spawn will be a girl.

In the new issue of Us Weekly out this Wednesday, Kevin Federline, 33, confirms that his girlfriend of two years, ex-pro volleyball player Victoria Prince, 28, is five months pregnant with their first child.

They will be naming her Jordan.

Explains Federline to Us of the name choice: “[Victoria] said that if we were going to have a little girl, she wanted to name her Jordan. And then, we actually thought that it was a boy, but we stuck with the name Jordan because, you know, it fits both ways.”

He adds: “We just found out the other day that we’re having a girl. So it worked out!”

She’ll be Federline’s fifth: He and Spears share sons Preston, 5, and Jayden, 4, who are “superexcited” about becoming big brothers, Federline tells Us; he and ex-girlfriend Shar Jackson have a daughter Kori, 8, and son Kaleb, 6.

Man, I really hope Victoria isn’t under the delusion that she is K-Fed’s final baby mama. Sadly, I feel there will be more. 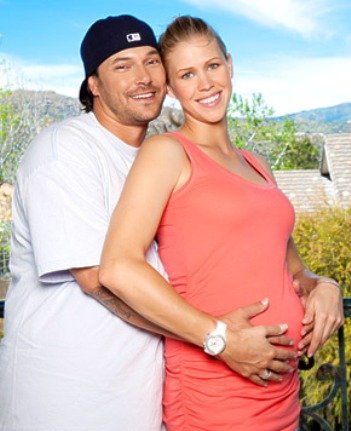