And how they got together is just so adorable I want them to be together for a while. Cuteness ahead!

Apparently Pia has had a crush on Mark for a while now, and was thrilled to learn that American Idol would be filming right next door to Dancing with the Stars on the CBS Studio Lot in L.A.

It’s like so fifth grade, but so sweet and cute at the same time.

Mark Ballas obviously called the number on the paper, because he and Pia were seen having dinner together at The Gulfstream Restaurant in Century City last Friday night.

Sources close to the couple say it was “a great first date” and the pair plans on out again soon. 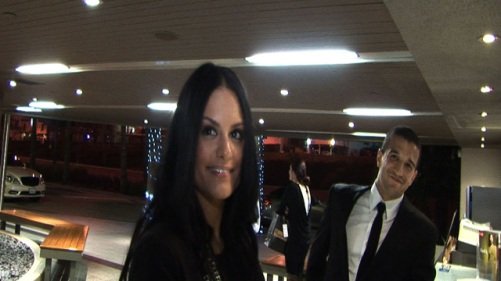 In addition to enjoying dinner with Mark, Pia’s already reportedly inked a one-album deal with Idol mentor Jimmy Iovine’s Interscope Records. The petite brunette — a graduate of Manhattan’s prestigious LaGuardia High School of the Performing Arts, also known as “The Fame School” — sent shockwaves through fans when she was unceremoniously ousted from Idol’s 10th season last Thursday night, prompting outrage over what some are calling one of the biggest upsets in the show’s history. [source]