After what could quite possibly be one of Hollywood’s longest pregnancies (seriously, doesn’t it feel like forever since we found out?), Mariah Carey, 41, finally popped out dem babies on Saturday; officially making the singer and her husband Nick Cannon, 30, the proud parents of twins.

And on their third wedding anniversary, no less!

As expected, the dual offspring came in the form of one girl and one boy. They have yet to be named.

Mariah Carey’s representative, Cindi Berger, confirmed to The Associated Press that the couple welcomed their babies into the world around 9:00 a.m. local time on Saturday at an undisclosed Los Angeles hospital.

Born first was the girl, weighing in at 5lbs 3ozs and measuring 18 inches long. The boy was slightly larger, at 19 inches long and 5lbs 6ozs. Mariah’s hit “We Belong Together” played as the twins were born.

Reportedly, when Nick Cannon got to the hospital with his laboring wife in their Rolls-Royce Phantom, he was so nervous that he drove to the wrong hospital ward. According to Carey’s rep Cindi Berger, the moment the nervous father-to-be arrived at the hospital was “like right out of an ‘I Love Lucy’ skit.”

A much calmer Cannon shared his joy with the world a few hours later via Twitter saying, “My wife just gave me the most incredible anniversary gift ever in life! I won’t ever be able to top this!” 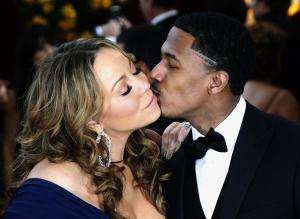