I’m going to go out on a limb here and say that Sir Paul McCartney is the marrying kind, and simply would rather be married than not. But hopefully he’s learned a huge lesson from his last marriage and will have a friggin’ prenup this time!

After four years together, former Beatle Paul McCartney and American businesswoman Nancy Shevell are engaged to be married.

The pair first started dating during the summer of 2007, after McCartney’s nasty split from Heather Mills, but before their divorce was finalized.

Friends of Paul McCartney, 68, and Nancy Shevell, 51, say the duo is “the perfect couple,” with one telling People magazine that Paul and Nancy “have the right chemistry” and “they’re both cool, chilled out and optimistic.”

Paul’s children love Nancy too, which is great considering how they loathed Heather Mills. Reportedly, one of the main reasons they have no qualms about the marriage is because Nancy Shevell is a millionaire in her own right, and clearly not after Paul McCartney’s money. (A prenup is still a good idea, Sir Paul. Just sayin’.)

Here’s a little bit of something interesting – Paul McCartney and Nancy Shevell have actually known each other for years:

The couple met more than 20 years ago in the Hamptons. The Blakeman’s had a house near McCartney’s estate. They summered together when Sir Paul was married to wife Linda and later to Heather Mills. [source]

Most recently, Sir Paul and Nancy were spotted together on the red carpet at the Costume Institute Gala at the Metropolitan Museum of Art in New York City last Tuesday.

Cheers to the happy couple! 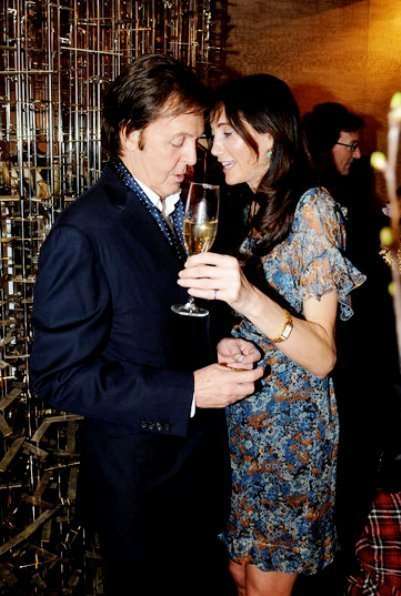