I haven’t discussed the trials and tribulations of Lindsay Lohan in a while, and figured you could probably use an update, so here it is. You’re welcome.

Since last we visited our sweet LiLo, her felony theft charge has been reduced to a misdemeanor, she was sentenced to 120 days in jail for violation probation and immediately bailed out, and now she’s dutifully performing her court-ordered community service (480 hours of community service at the Downtown Women’s Center and janitorial duties at the coroner’s department).

The fate of her future, however, is still in the hands of the Courts and Probation Department.

While Lindsay Lohan will most likely not make an appearance in court Wednesday (she isn’t required to), her lawyer Shawn Holley is expected to enter a no-contest plea on her behalf for the misdemeanor theft charge.

At that point, it will be up to the Probation Department whether or not to throw Lindsay in jail. Their decision will come in the form of a sentencing report, and will recommend that Lohan either serve time behind bars or under home confinement.

If sentenced to home confinement, Lindsay Lohan will once again be fitted with an ultra-sexy ankle monitor.

Sources close to the situation say that more than likely, Lindsay Lohan’s no contest plea to the theft charge will not bring additional jail time, and that any sentence from the misdemeanor conviction will probably run concurrently with the probation sentence already in place.

According to the Sheriff’s Department spokesman Steve Whitmore, Lohan’s 120-day sentence could be reduced to about 71 days for good behavior.

Due to jail overcrowding, Lindsay’s actual “time served” could end up being as little as 14 days – female inmates for nonviolent crimes often serve about 20% of their time.

So basically, it’s looking like Lindsay Lohan will be ordered to home confinement for two weeks. We’ll find out for sure on May 11th. 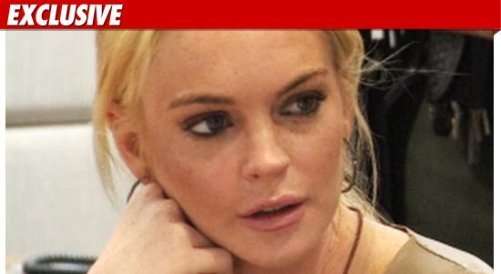