I’m sorry, but when did it become legal for someone under the age of 18 to get a tattoo in California?

Listen, I’m not a prude by any means, but I had to wait until I was 18 before I got pierced and tatted – and Ali Lohan should have to wait too; I don’t care who she is or what family she’s from.

That being said, I do think it’s kinda neat that the Lohan ladies (term used lightly) all have the same tattoo. I think having the same tattoo as my mother and sister would be fun; but they’re total squares so it’ll never happen.

Ali Lohan, 17, now has a little star tattoo on the inside of her left wrist, just like her older sister Lindsay and their mother Dina. Rumor has it the star tattoo is not the first time Ali has been inked; according to reports, the almost-legal Lohan also has “bella vita” on her back – just like Lindsay.

Permanently marking her body, by the way, is not the first time Ali has followed in her big sister’s footsteps. She began modeling when she three, appeared in a couple of Lindsay’s music videos, and even dabbled in her own singing career.

Clone, much? It’s like Ali is Dina Lohan’s gravy train spare waiting in the wings for when her Lindsay loot has dried up for good. And if Ali doesn’t work out, there’s always 14-year-old Dakota. 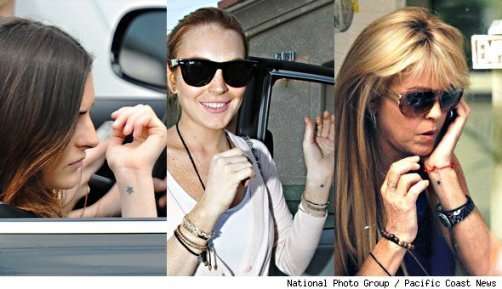