Uh oh! Is Lindsay Lohan back to her boozing ways just days after friends insisted she was on the wagon for reals this time?

RadarOnline.com is reporting that Lindsay Lohan was out with friends at a Hollywood nightclub in the wee hours of Sunday morning when she was involved in a little tussle. And there may have been alcohol involved.

According to eyewitnesses, Lindsay Lohan appeared to be “belligerently drunk” and that she and her friend were “doing shots of something all night.”

Lohan allegedly grabbed the wrist of a woman who was trying to take a picture of the actress while someone in Lindsay’s group snatched the Nikon point-and-shoot camera and dumped it into an ice bucket. The camera was damaged but the memory card was spared.

“We didn’t press charges because we thought it was funny at first,” said an eyewitness who asked not to be identified. He and three friends, including the owner of the camera, sat for an hour at a table next to Lohan’s. “We all were drunk. But then we figured out when we got home that the camera was broken because water seeped in. The memory card, though, was still good.”

The incident occurred at the new Paul & Andre Hollywood nightclub. In the photo Lohan, 24, who last week escaped serious time behind bars after pleading no contest to a theft, can be seen sitting on the back of the couch while her friends are partying. According to the source, so was Lohan!

…She looked like she was falling all over the place. She was being stupid.

“When she grabbed my friend’s wrist, another woman who was with Lindsay grabbed the camera. She kept saying ‘I need that camera’ over and over again. So the woman got it and sunk it into the ice buket [sic].”

The spywitness said there was no other incident.

“We were sorta leaving and we didn’t want to cause any more trouble,” he said.

Lindsay Lohan’s new publicist Steve Honig says he has “[no] knowledge of this alleged incident whatsoever.”

For Lindsay’s sake, I hope this is all a big misunderstanding.

The photo in question: 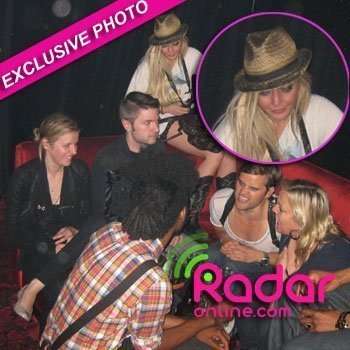