Home
Hollywood Gossip
Selena Gomez Hospitalized. Is There A Bieb-Bun In The Oven?

Let the pregnancy rumors begin! You know, because it couldn’t possibly be the stomach flu, or food poisoning, or simply too much stress.

“Last night after Selena’s appearance on The Tonight Show, she wasn’t feeling well and was taken to the hospital,” her rep tells People. “She is currently undergoing routine tests.”

Selena Gomez, 18, was reportedly complaining of nausea and a severe headache yesterday before being taken to the hospital emergency room after her appearance on The Tonight Show with Jay Leno.

First her purity rings comes off, then she’s photographed clearly enjoying a grope session with Justin Bieber, and now this.

Obviously she is with child. Duh.

It’s either that, or she was somehow poisoned by a rabid Justin Bieber fan. Those buggers are freaky. And now that Selena and Justin have taken their love public and made their made-in-celebrity-tween-gossip-heaven pairing official, there’s no telling what the frothing-at-the-mouth Bieber-ites are capable of.

While a Selena Gomez pregnancy would be far more entertaining to talk about than some boring 24-hour-bug, I have a feeling a Justin Bieber fetus is not involved in this particular situation. And if it is, we’ll never know about it, and it will be written off as “something she ate.”

I bet Disney has a “special” fund set aside for just such a situation. 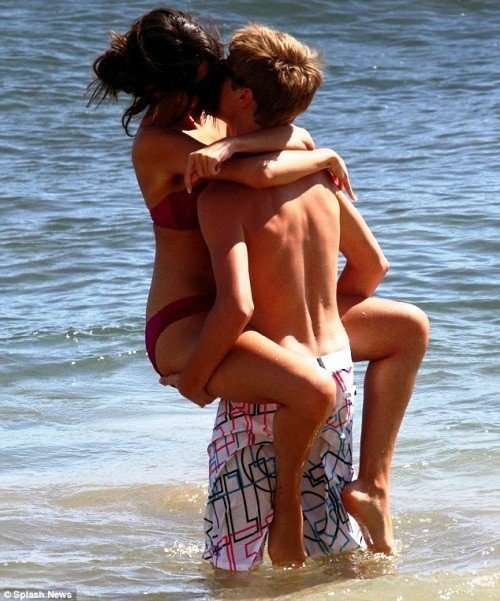