Lily Allen had a little extra something to smile about at her wedding on Saturday. Not only was she celebrating her joyous marriage, but she and new husband, Sam Cooper, gleefully shared with their closest friends and family that they are expecting a child.

Fingers crossed the pregnancy sticks this time! Lily Allen has had a very public battle with miscarriages in the past, and I hope with this pregnancy she’s able to move beyond the heartache.

Wearing a lace dress from French designer Delhine Manivet, the 26-year-old beaming bride arrived at St James the Great Church in Cranham, a UK village near Stroud, in a Bentley with her father by her side. Allen’s father, Keith Allen, by the way, portrays the Sheriff of Nottingham in the BBC’s Robin Hood series.

Ms Allen and Mr Cooper – a painter and decorator who runs a building company – tied the knot at St James the Great Church in Cranham, a village near Stroud. It was during his speech at the reception, staged in the couple’s garden, that Mr Cooper, 33, revealed that Ms Allen was already around 16 weeks pregnant.

Comedian Harry Enfield, artist Damien Hirst, and actor Angus Deayton were among the 100 guests at the wedding, while the television host Miquita Oliver, a childhood friend of the singer, had the role of one of Ms Allen’s bridesmaids. Her brother Alfie, who is an actor and about whom Ms Allen recorded an entire song on her first album, had the role of usher.

…Readings during the hour-long service included Edward Lear’s “The Owl and the Pussycat” and the lyrics to “Have I Told You Lately”, the emotional Van Morrison ballad.

Congratulations to the happy couple! And I look forward to reporting on the birth of their child later this year!! 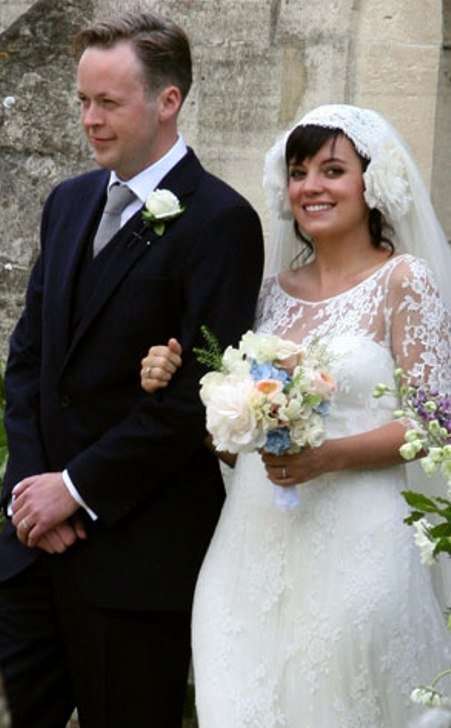