I’m calling shenanigans on Jesse James and Kat Von D breaking up because of distance. It just doesn’t make sense. There are thousands of couples who make their relationships work despite long distance living.

What does make sense, however, is that 42-year-old Jesse James is a known liar and cheating bastard who very well could have stepped out on 29-year-old Kat Von D as he so famously did Sandra Bullock.

Side Note: The breakup of Jesse and Kat came on the day of Sandra’s 47th Birthday.

Jesse, who lives in Texas with his three children, told People magazine, “I’m so sad because I really love her. The distance between us was just too much.” Kat lives in Los Angeles, where she films her reality show LA Ink.

In true Kat Von D style, she used Twitter to make her statement.

“I am no longer w Jesse and out of respect for him, his family and myself, thats all the info I’d like to share. Thanks for respecting that.” 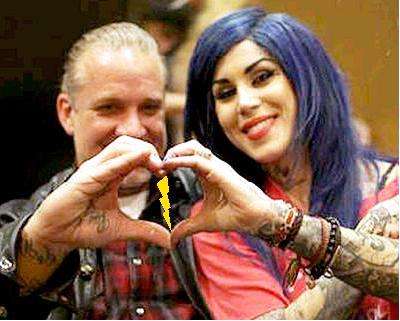