In addition to a little play time with Faith Hill and Tim McGraw dolls, Carrie and Brad poked fun at the Hank Williams Jr foot-in-mouth-debacle, with Hank joining in on the fun, before turning their playful teasing to Kim Kardashian and her “forever” marriage.

I must say, Carrie and Brad are quite cute together; it’s clear they have a real friendly connection and honest chemistry.

Entertainer of the Year: Taylor Swift

New Artist of the Year: The Band Perry

Vocal Duo of the Year: Sugarland

Album of the Year: ‘My Kinda Party,’ Jason Aldean

Single of the Year (Award goes to artist and producer): ‘If I Die Young,’ The Band Perry

Song of the Year (Award goes to songwriters): ‘If I Die Young,’ Kimberly Perry

Music Video of the Year: ‘You and Tequilla,’ Kenny Chesney Feat. Grace Potter

In addition to making an appearance in her Barbie doll form, Faith Hill took to the CMA stage for the first time in five years to perform her new single, ‘Come Home.’ The song will be included in Hill’s album scheduled for release in early 2012, her first in more than 6 years. 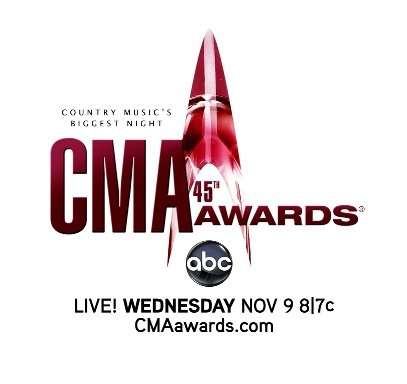