So remember how I was all excited about Lindsay Lohan hosting SNL? Yeah, well, it wasn’t nearly as great as I thought it was going to be. And I’m not the only one who was far from impressed; not by a long shot.

It was clear that Lindsay was excited to be there, but she was obviously anxious; which is sad because I really think Lindsay Lohan could have done a much better job if she was simply more relaxed and not so nervous about bombing.

There was one highlight of the evening, however, in the form of some awesome Disney princesses!

In a pre-recorded segment, Lindsay Lohan appeared as Rapunzel, alongside other familiar princesses, in “Real Housewives of Disney.” Being a huge fan of The Real Housewives of Beverly Hills myself, I found this skit to be particularly funny because of the obvious jabs against the ladies of Beverly.

From Kristin Wiig’s Cinderella, who was clearly a parody of Kim Richards, to Jenny Slate’s Belle defending her beast husband Kelsey Grammer (not to mention the Dena-inspired $25,000 item), I found myself left with a huge laughter-caused stomach ache after all was said and done.

Check out the hilarity for yourself!

And now NBC has released a series of deleted scenes from the skit, which caused me to practically break down in tears I was laughing so hard. Prince Charming is just too much!

I don’t know about you, but I would love it if “Real Housewives of Disney” became a Saturday Night Live staple.

On a related note, how do you think Lindsay Lohan did overall? Share your 2-cents in the comments below! 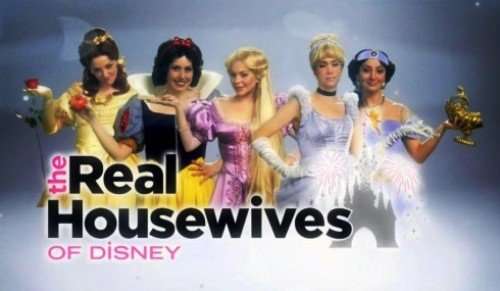