One of my goals in life is to some day own a house surrounded by land, and far enough away from neighbors so I can’t hear their toilet flush or clearly hear family spats. Have I ever mentioned that I live next door to a couple who likes to fight either first thing in the morning or right before midnight?

When I heard the following story and saw the pictures of the feuding neighbors in Utah, I laughed. But then it occurred to me that I too would be pretty darn pissed if I bought my dream home and my neighbor pulled a similar stunt.

A city councilman in Utah, Mark Easton, had a beautiful view of the East Mountains, until a new neighbor purchased the lot below his house and built a new home. The new home was 18 inches higher than the ordinances would allow, so Mark Easton, mad about his lost view, went to the city to make sure they enforced the lower roof line ordinance. The new neighbor had to drop the roof line, at great expense.

Recently, Mark Easton called the city, and informed them that his new neighbor had installed some vents on the side of his home. Mark didn’t like the look of these vents and asked the city to investigate.

When they went to Mark’s home to see the vent view, this is what they found… 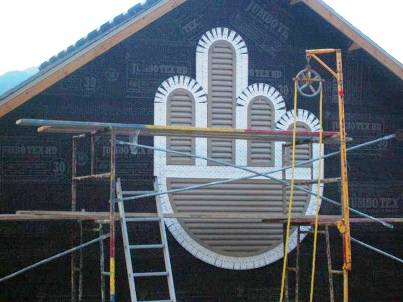 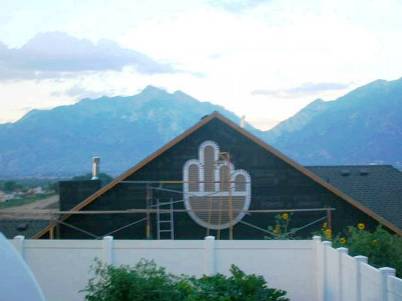 PROOF that it’s real, at Snopes.com