Home
Hollywood Gossip
The Most Outrageous Divorce Clauses Ever Written

I’ve had this in my files for a while now, but never felt the urge to do anything with it. Given yesterday’s post, I think the time has come.

There are all kinds of divorce clauses: clauses to keep quiet, clauses to pay an escalating portion of one’s future earnings, and even clauses that some might consider the most extreme – those that mandate therapy. Hollywood seems to be the source of endless fodder. In fact, it’s not unusual to find all sorts of written clauses so that an ex will keep quiet about the nasty details of the marriage until the day they die…or perhaps get a more lucrative book deal. Britney as well as former Beatle Paul McCartney have both opted for gag clauses in the hopes of muzzling their former spouses…

Here’s a look at [some of] the most outrageous divorce settlement clauses ever written:

Musical Extremes
Jennifer Lopez has been accused of all kinds of diva-like behavior over the years, all white décor from the flowers to the couches to the candy. Before she married singer Marc Anthony, you can bet she had a hand in the terms of his divorce from former wife Dayonara Torres. Beyond merely deciding on custody of their three children and on who would get the house, Ms. Torres had to sign an agreement that forbade her from speaking ill of J-Lo. Essentially, the former Mrs. Anthony could be sued for saying bad things about the current Mrs. Anthony…

Even more costly clauses
One of the costliest clauses in history comes from someone who you think would have known better, William O. Douglas. In 1954, he divorced his first wife. Her lawyer inserted in the divorce settlement an escalator clause whereby the more money Douglas made from his books and lectures, the more he had to give her in alimony…essentially putting him on a financial treadmill. She never remarried. He eventually found a way around part of his problem by employing a ghostwriter…

The Therapy Clause
A more recent development in divorce clause may sound out-of-the-ordinary, but is becoming an increasingly popular final stipulation to any messy divorce. An increasing number of couples are inserting therapy clauses. Many of these clauses call for family therapy and sessions for any children involved in the divorce. Others require the husband and wife to see a professional during and after the divorce to ensure it ends as amicably as possible. A little unusual, but considering how nasty some of history’s divorces have ended, not without merit. 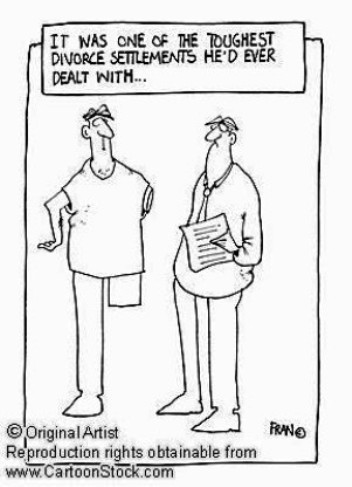