To release my crime

Crazy Boy George has gotten himself into quite a pickle this time. And by pickle I mean prison jumpsuit.

O’Dowd had pled not guilty to charges stemming from an incident in his London flat in April of last year.

It was not the first time the former pop star and the male escort had hooked up – in January of 2007 the two had some nasty little fun including cocaine and pornographic pictures. Soon after Boy George accused Carlsen of stealing those photos and invited him back to confront him.

According to Audun Carlsen, George O’Dowd was upset that the two were not having a relationship and that’s why aged singer handcuffed him to a hook in the wall and beat him with a chain.

Boy George’s lawyer said that the male escort’s injuries were the result of rough sex that included bondage.

I totally loved Boy George when I was a kid, but you know what, he’s a total freak. Maybe it was the drugs. Or maybe all that crazy head and face paint seeped into his brain.

Whatever the reason, Boy George is no longer the Boy George of the 1980s. And let’s face it, he was pretty out there back then – so you can only imagine how whacked out he is now. 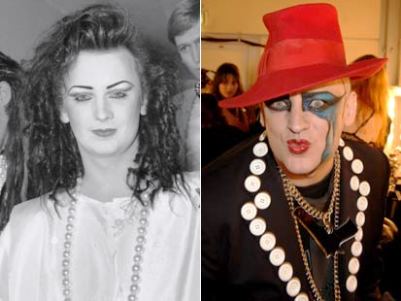