Thursday is garbage cans on the curb night, with recycling going out every other week.

As I drove up to my house tonight after date night, I noticed a garbage can and a recycling can in front of my house.

How nice of my cute neighbor with Barkly the Dog to have put my cans out, I thought.

I pulled into my driveway and realized that my cans were still in front of my garage where I keep them. Then I looked over towards my new neighbors’ place and saw that their cans were not there.

Not only did my new neighbors put THEIR cans in front of MY house, they put two of THEIR huge broken down boxes in MY recycling can.

So I did the only sensible thing, and moved their cans to be in front of their house. Then I removed their two broken down boxes from my recycling can and leaned them up against their garage door with the rest of their boxes.

Perhaps the boxes in my can wouldn’t have bothered me if I didn’t have a ton of recycling of my own to put in there.

Now, don’t get me wrong, I’m not a bad neighbor who wants her neighbors to die, but come on!

They have plenty of room in front of their place. What the hell.

By the by, I have no idea who is actually living in that place. I’ve seen three different cars but only one at a time, and none ever stay a full day or night. I’ve only seen one person go into the house and it was a teenage-looking boy. It seems often times the lights are on but no one is home. Between you and me, I think the place is home to creatures not of the human kind. Maybe they’re vampires. 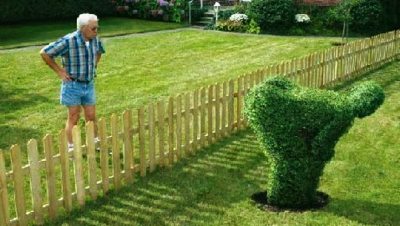